Other single-handed gimbals are available for purchase at lower prices, but the Ronin-S stands out for a variety of reasons, including its simple to use setup app and its offset roll axis motor, which is lowered down behind the camera so you can more clearly see the back of the camera when shooting. Aside from this, DJI claims that it is using the most powerful motors it has ever utilized in a handheld gimbal.

Additionally, the Ronin-S will connect to a variety of common cameras and provide a variety of levels of control, ranging from video start/stop to remote focus and zoom control.

With motors that can counterbalance the motions of your camera as well as produce automatic (or guided) tracking and panning movements, the Ronin-S delivers three-axis stabilization, similar to other gimbals on the market. DJI has launched nine new attachments for the Ronin-S, including handy items like a focus motor that allows for remote follow focus on extra lenses when using the Ronin-S with additional lenses. 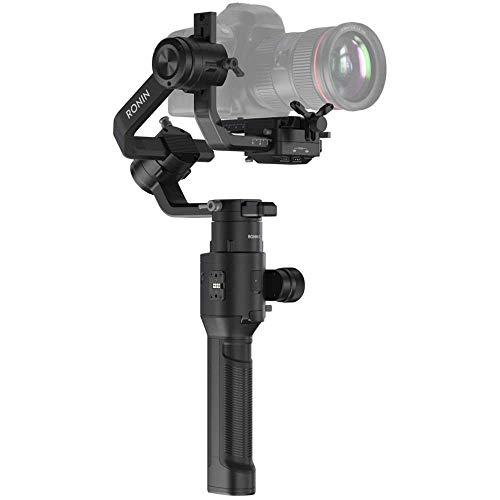 We were thrilled even before we saw the Ronin-S since it arrived in a sturdy, lightweight polystyrene travel box that provided enough protection for all of its components. It closes with a simple twisting clasp, which is a great gesture from DJI, since it eliminates the need for purchasers to instantly spend further money on an aftermarket protective case.

The device itself is composed of three major components: a 3-axis gimbal, a handle/battery, and a handle extension that may be used to convert the handle into a tripod. This is a tool-free assembly, but once you’ve installed your camera (after initially mounting it to a quick-release plate through its tripod attachment), you’ll need to make a few adjustments to the gimbal to ensure that it’s balanced across both axes of rotation.

Even though the instructions in the supplied quick start guide are comprehensive, novices may find that watching DJI’s online video lessons helps them grasp the fundamentals of balance more quickly.

When you’ve used the Ronin-S for a while, we believe you’ll find the balancing procedure second nature. After all, it’s something that needs to be done every time you change the camera or the lens attached to the camera. Although we were able to recall the right order when reassembling the gimbal while out and about, we found it difficult to do so without the reference book.

Because it is mostly constructed of metal, the Ronin-S is both durable and substantial. The disadvantage of this is that it is very hefty. A weight of 1.8kg might not seem like much, but consider that you’ll be adding the weight of at least a camera and lens to it, as well as holding it at often uncomfortable angles.

While we discovered that resting the handle extension on a thigh helped reduce the strain over long sessions, you can anticipate your arms to receive a great free workout while you’re out shooting with the camera. Using a two-handed gimbal, like as DJI’s Ronin-M, may be preferable for shooting with larger cameras or when putting accessories to the gimbal, such as an external display, on the gimbal.

One innovative feature of the gimbal design is the angled roll motor, which is offset to allow you to view the camera’s rear screen – at least for the majority of the time – when shooting. The roll motor on the majority of gimbals is located directly behind the camera, obstructing your vision.

In order to provide more grip, the handle and extension are wrapped in a rubber-textured substance, and the product’s external elements appear to be waterproof in appearance. DJI’s promotional videos show the Ronin-S being used in a heavy snow shower, despite the fact that the firm makes no particular promises about the camera’s waterproofing.

If you’re shooting in rainy weather, you should make sure that the rubber covers are in place to prevent the ports from being wet or dusty.

The Ronin-S does an excellent job of keeping your camera steady, thanks to its powerful motors and DJI’s always-impressive stabilization system, which are both included. The precise pace at which the gimbal shifts the camera is dependent on your own settings (which you can access through the app), but suffice it to say that you can wave the camera about to an almost ridiculous degree and yet end up with the steady, smooth video.

For the most part, the Ronin-S will move the camera to follow the motions of the gimbal: you may aim the gimbal up, left, right, or down and the camera will move smoothly in response, enabling you to track and follow your subject. By pressing and holding the M button while in Sport Mode, you may immediately boost the sensitivity and speed of the device.

Holding down the trigger at the front of the camera maintains the camera focused in the direction it is now pointing, regardless of where the gimbal is moving. Twice pressing the screen refocuses the camera, and tapping three times turns the camera around to face the user (also known as “selfie mode”). Manual camera movements can be accomplished by using the thumb joystick located on the rear of the handle if greater precision is necessary.

Holding the gimbal is possible in three different ways: standard, flashlight, and underslung. This allows for tremendous versatility; it is simple to hold it high, at waist level, or extremely low to the ground. The fact that it is quite tiny adds to this by allowing you to maneuver it into tight spaces that two-handed gimbals couldn’t reach.

For the sake of this review, we used a Panasonic GH5S, which, at the time of writing, is the camera that is most nearly compatible with the Ronin-S, along with the original GH5.

It is possible to utilize the Ronin-onboard S’s controls to capture images, start/stop video recording and pull manual focus using the MCC cable that is provided with the camera (depending on the lens). Users of the Canon 5D Mark III, 5D Mark IV, and 6D Mark II, the Nikon D850, and the Sony A7S II and Sony A6300 will only be able to stop and start recording and photo capture – and this will necessitate the use of an inconvenient IR blaster setup for the Sony cameras. Other cameras are not officially supported at all, however, it appears that firmware upgrades may expand the list of compatible cameras in the near future. Keep an eye on things.

The battery life, which DJI claims may last up to 12 hours on a single charge, is another area that does not disappoint. In our experience with the Ronin-S, the battery never dropped below two of its four indication bars during our whole time with it. The battery is recharged using the USB-C connector on the handle, and it takes around 2 hours and 15 minutes to fully recharge the battery.

For those who want to get the most out of their Ronin-S, it’s imperative that they download the app. It’s compatible with devices running Android 4.4 or iOS 9.0 and higher versions (sorry, Windows phone users).

Its primary function is to assist you in ensuring that the gimbal is properly set up before each usage, with the Auto-Tune option being particularly useful for verifying the balance anytime a new camera or lens is mounted.

Although the software allows you to personalize the performance of each of the three user preset settings, it also provides an array of creative shooting modes that allow you to capture time-lapse, hyper-lapse, and motion time-lapse films, as well as panoramic images, with the camera. You may also use it to remotely control the motions of the gimbal, even while the Ronin-S is being held by someone else or when it is perched on its tripod.

On the surface, it appears to be a very easy software, but delving deeper into the settings uncovers a plethora of choices for regulating the gimbal’s behavior and performance. A few parameters may even be changed to cause the gimbal to spin indefinitely as you go forward in the camera view. Take a peek at our example video to see how this works in practice.

The DJI Ronin-S is a really well-thought-out gimbal that is quite simple to operate and operate with. Operating the gimbal is simply because of the intuitive layout of the controls on the gimbal. In addition to a simple double touch to bring the camera back to the center, holding the trigger is a fantastic idea for shutting off the motors. The only thing that bothers me is the weight. If it were only 1/4 or 1/2 as much, it would make running the Ronin-S for extended periods of timeless taxing on the body’s resources. The machining of the gimbal is of the highest quality. All of the components are simple to put together and secure. It’s astonishing that the motors can take 8 pounds of weight. Its motors are some of the nicest I’ve seen on a portable gimbal, and the Ronin-S has some of the greatest. Very quiet, yet really effective.

Balancing the Ronin-S is a straightforward process. There is nothing unique to perform, so as long as you are comfortable with the process, you should have no problems. The fact that the gimbal may be slightly out of alignment and still function is a significant advantage when lifting heavy items. It has worked flawlessly even when I have removed ND filters and used lenses that protrude while zooming. The Ronin-S behaved as though it had been properly balanced. That is a significant time-saver. Without a doubt, I urge that you achieve the best performance and battery life that you possibly can by optimizing the balance as much as you can. When a gimbal isn’t balanced appropriately, the motors have to work harder to compensate. The battery life is excellent, with a capacity of 12 hours sufficient for a full day’s shooting, and the charging time of around 2-hours is extremely reasonable. When the gimbal isn’t being utilized, it’s a good idea to top off the camera. Take a lunch break and recharge your batteries so that you can continue to use your device for several more hours.

The software plays a significant role in the overall user experience provided by these gadgets. It must be simple to operate, in contrast to the menu structure seen in Sony mirrorless cameras. When it comes to getting started, simplicity is crucial. DJI performed an excellent job with the Ronin-S application. Very simple to use, connects quickly and has a variety of amazing additional capabilities like timelapse and motion capture, among other things.

Last but not least, being able to operate the camera while mounted on the gimbal makes operating the camera a pleasure. There are currently no completely compatible record triggers and Focus Wheels available for cameras other than the Panasonic GH5. However, DJI intends to make this work with Sony, Nikon, and Canon cameras in the future through firmware upgrades. I believe that the Ronin-S can manage the weight, and I believe it can with the proper camera configuration, and it will give those fluid maneuvers for a very competitive $699 price tag.

Gimbal For Camera helps you to select the best gimbal for mirrorless and DSLR cameras.